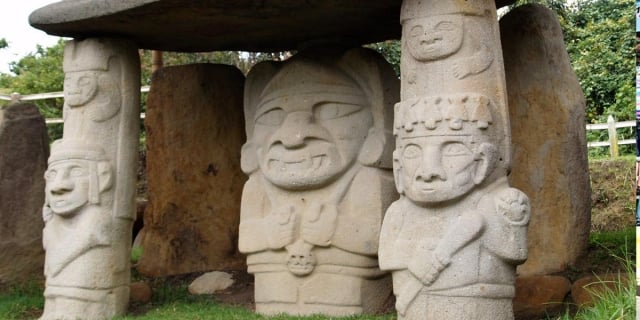 How to get to the San Agustín Archaeological Park in Huila, Colombia

The San Agustín Archaeological Park , located in the department of Huila , is not only one of the seven wonders of Colombia , but the new world; In fact, Unesco included San Augustin in its list of world heritage sites , because the sculptures found here are the first pre-Columbian historical relics, which are not only of great importance, but are simply beautiful and mysterious.

You may be interested: Cities and places to visit in Colombia in 2019.

It is believed that the San Agustín Archaeological Park was an ancient astronomical and ceremonial center of the culture that inhabited this area of the department of Huila , and not only of the local civilization, but to this place people use to came from other parts of the continent to bury their important members.

So the San Agustín Archaeological Park , is probably one of the most special places that exist on earth, one of those places that exude energy, peace, harmony that make you feel as if an inner strength filled your being and make you witness a big, unique and powerful thing.

If you want to experience and be a witness yourself to what I am saying, stay and learn how to get to the San Agustín Archaeological Park in the Department of Huila and what are the main points you have to see inside it.

How to get to San Agustín Park?

You can get to San Agustín Park from Neiva , taking a bus in the transport terminal for 33,000 COP and after about four and a half hours you will be there. Now, if you are in another city and want to get directly to San Agustín without going through Neiva, you can take a direct bus from Bogotá to San Agustín from the Salitre Terminal for 68,000 COP or a little more and be there after ten hours.

You may be interested: Tips to buy cheap tickets and better search engines to get them.

You can also get to the San Agustín Archaeological Park from Medellín for around 120,000 COP on a trip that last twelve hours or from Cali for 40,000 COP you will be in San Agustín after eight hours.

And if you do not want to travel as much or you're in another city farther away, like those on the coast, you can choose to take a plane and get cheap tickets to Neiva and then do the tour described above.

The San Agustín Archaeological Park is just outside the urban area of San Agustín ; exactly 3 kilometers away, which you can walk without any problem, and so the majority go walking or hire a transport that takes you to the entrance of the park , which has a cost of 25,000 COP  and the ticket includes the entrance to the 3 venues of the park: Mesitas, Alto de Los Ídolos and Alto de Las Piedras . For students, the entrance ticket to San Agustín Park costs 10,000 COP, for groups with prior authorization 15,000 COP per person and children under 12 years and adults over 60 do not pay entrance fee.

What to see in the San Agustín Archaeological Park?

The San Agustín Archaeological Park is a fairly large place that takes at least four hours to get to know, you can do the horseback ride if you prefer. From the moment you enter the park you can see large statues of mythological beings, animals, gods, warriors and priests  carved in stones.

The park has hundreds and hundreds of these statues, so if you ask what to see in the San Agustín Archaeological Park , the answer is EVERYTHING, each one of those images has a meaning and a particular story that you will want to see and know, however there are some specific areas that you can not miss for anything in the world.

In first place is the Archaeological Museum where different utensils, jewelery, ceramics, statues, sarcophagi, arrows, drums, blowguns and all kinds of articles found in the area are exhibited. The Forest of the Statues , which contains 35 statues of different origins surrounded by thick vegetation; hence the forest.

Then come the different Mesitas (A, B, C and D), which are in different points of the park and contain large statues, which are believed to be very important people, due to the size of them. Follow the Ceremonial Fountain of Lavapatas which is composed of 3 ceremonial pools with engravings and reliefs. And very close to there, is the Alto del Lavapatas , the highest point of the park that besides containing more statues, has a panoramic view of the impressive place.

Alto de Los Ídolos and Alto de Las Piedras , are two other archaeological parks that are located in the municipality of Isnos and are part of the San Agustín Park , because they also contain an important collection (especially the Alto de Los Ídolos ) of Augustinian sculptures. If you want to visit them you can get to Isnos from the urban center of San Agustín , where you will find different options that will take you to the municipality.

Then there are other sites that contain other sculptures different from those found in the San Agustín Archaeological Park and which are also worth knowing, these sites are El Tablón , La Chaquira , La Pelota and El Purutal . To get to these trails offer horse excursions.

Eat and sleep in San Agustín

Where to eat and sleep in San Agustín , should not be a problem or a torment, since it is a quite touristic site, throughout the town you can find different accommodation options; from camping to luxurious cabins and hotels, and in the same way restaurants.

It may interest you: The best and most incredible places to camp in Colombia.

It may interest you: Do you want to travel more this year? Follow these tips to save and travel in 2019.

Nearby is the desert of La Tatacoa , another unmissable and beautiful place in Huila. You can also visit the impressive towns of Santander . In the Eje Cafetero there is the municipality of Filandia and the impressive Valle del Cocora . In the north of the country you can not miss the Tayrona Park , Lost City , Cabo de la Vela and Punta Gallinas . Now, if you want you can enter the blog and know everything we have for you.