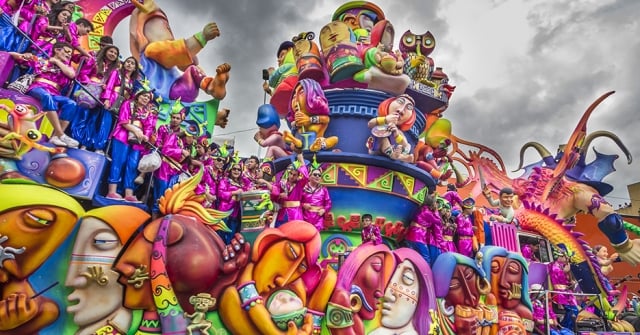 The C arnaval de Negros y Blancos is an expression of Colombian culture, in fact, it is part of the representative list of the Intangible Heritage of Humanity by Unesco, and is one of the most important fairs and festivals in southern Colombia, and of The whole country in general. This is one of the parties that you have to live at least once in your life, it is a waste of colors, symbolisms, typical dances and much joy that fill the streets of Pasto , the first days of each year.

You may be interested: The best destinations to spend New Year in Colombia.

The most beautiful thing to see during the Black and White Carnival ; In addition to the colors and figures that adorn the floats, parades and in general the whole city, it is to know the history behind each celebration that takes place every day that the carnival lasts. For the year 2020 the Carnival of Blacks and Whites will be held from January 2 to 7 in the city of Pasto , Nariño . This is the official programming.

Parade of the Colonies ~ January 2

It is the first official day of the Black and White Carnival . During this day the protagonist is the famous Parade of the Colonies, in which the different communities parade through the streets of Pasto showing their traditions, myths and legends. Also during this day, at the official opening of the mayor, he gives the baton to the indigenous leaders of Nariño.

Although there are many versions about the origin of the Castañeda Family ; some say it was a family who invited the Castañeda to the carnival, and others say it was a family that was on a pilgrimage to the Sanctuary of Las Lajas . Anyway, the only certain thing is that this very particular family came to Pasto with his whole family, including animals, suitcases and with almost everything they had at home. Therefore, this day is in honor of them and in this parade people dress in costumes of the time.

It may be the craziest day of the Carnival of Blacks and Whites . It is named in honor of slaves of African origin who during the holidays got a day to be free and give free rein to all their desires and passions. During this day the attendees are painted black to commemorate that fact and as a way to be able to disinhibit and do what one wants regardless of what other people say.

The 6 of January in the whole world is the Day of Kings, but in Pasto it is the Day of Whites , day in which all the pastusas and travelers of the whole world are painted the face of white with flour, cornstarch or talc and return to the so-called Carnival Path to contemplate the Grand Parade , a formation of more than 7 kilometers long where the most impressive are the floats with immense colorful figures that represent the best of Pasto's culture, myths and legends , as well as the most famous people of Colombian politics.

Book your flights and the hotel in advance because the demand increases due to the large number of people who arrive in Pasto to participate in the Black and White Carnival , so everything increases in price.

Indispensable to wear comfortable clothes and do not be afraid to lose, because during these days of fun and joy, one becomes dirty in a way that clothes can be left in an unrecoverable state. You can also choose to buy clothes that you only wear at the carnival. Remember, here the way you are dressed is the least important. Eye, comfortable clothes, also means wearing appropriate shoes like a good pair of tennis shoes.

Try to wear or buy a pair of glasses to protect your eyes from the sun, but especially cornstarch, flour and other agents that throw without caution and can fall into your eyes.

Go out only with the essentials; cell phone, cash and copies or photos of your documents; The latter is very important, since among so many people, a lot of disorder and party, you can lose or even steal your personal belongings. First of all, never lose sight of your belongings.

Act with responsibility, let your loved ones know where you are going to be, especially if you come from another city or country and first of all follow the safety rules and recommendations of the police and carnival organizers

Get ready to enjoy one of the best parties in Colombia and live as is the Carnival of Blacks and Whites.