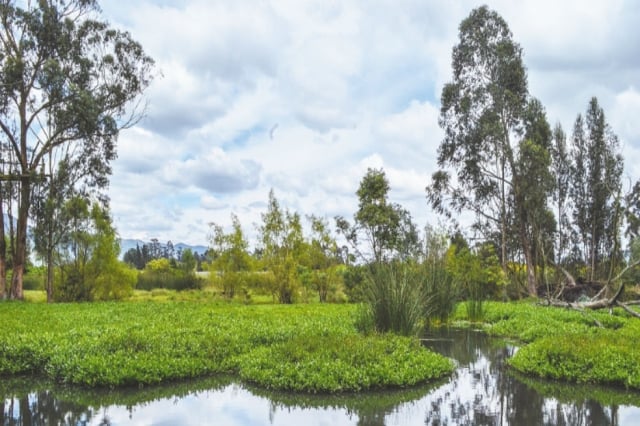 Colombia is a blessed country that has a rich and vast ecosystem that not only does good to the country, but to the whole world; amazing natural parks, mountain ranges, fertile Andean soils, moorlands (of which Colombia has 60% of the world total), equatorial climate, Amazon jungles, the waters of the Caribbean Sea and the Pacific Ocean. Besides that, it is the first country in the world that has the most species of birds and orchids, the second in plants and amphibians, the third in reptiles and frogs, and the fourth in mammals. And to that list is added the wetlands in Colombia that are of great global importance.

You may be interested: Ecotourism in Colombia. Best places to experience it

Wetlands in Colombia add up more than 31,700, however, there are only seven of them that represent a great value for everyone and that have been called Ramsar sites, included in the List of Wetlands of International Importance . If you want to know which are the most important wetlands in Colombia for the world, why they are and where they are, read on and you will find out.

You may be interested: These are the best destinations to travel alone in Colombia.

Why are these wetlands important in Colombia?

The Ramsar convention responds to this question by ensuring that wetlands in Colombia and around the world are essential for human life, as they are one of the most productive environments in the world and cradles of biological diversity, and as if that was not enough, they are water sources.

These wetlands offer countless benefits or ecosystem services, which also include the supply of fresh water, building materials and even serve to control floods. There is a great variety of wetlands in Colombia such as reefs, mangroves, swamps, lagoons and swamps, among others.

Which are the most important wetlands in Colombia?

Located in the department of Magdalena , this is not only one of the wetlands in Colombia , but is part of the list of Unesco Biosphere Reserves . This site has 20 lagoons of varied salinity with many rivers running through the area and a large area of mangroves. In fact, the site is important because of its mangrove ecosystem, which is the longest on the Caribbean coast. This wetland is also a spot for birdwatching many species of migratory and endemic birds.

In the department of Chocó is another of the wetlands of Colombia that are of great importance to the world. This river, which rises in the Serranía del Baudó, runs for 180 kilometers and flows into the Pacific Ocean. Likewise, this wetland includes a large number of mangroves, swamp forests, swamps and is the habitat of numerous fish species.

This wetland complex in Colombia is located in Risaralda, located in Los Nevados National Natural Park . It includes lagoons, marshes, peatlands interconnected or functionally related to each other and influenced by the vegetation of glaciers and páramos. The site houses 52 species of birds.

This wetland system in Colombia supplies water to Bogotá. This site is home to one of the most humid moorlands in the country and is a privileged place of endemism because it has been the refuge of more than 400 species of flora and 500 of fauna, among which are many endangered species such as the spectacled bear and the frailejón. The lakes that are part of this natural park have an added cultural and historical significance, since they have a great pre-Columbian ceremonial importance.

With just over 39,000 hectares, this wildlife sanctuary, made up of a volcanic lake and Andean forests, is the second of the largest wetlands in Colombia that exist in the country. It hosts a diverse range of fauna and flora and as the previous area, it also has a great cultural significance as it was inhabited by pre-Columbian communities and currently, their descendants live in the surroundings that consider it a sacred place as for the descendants of the Tayrona in the Sierra Nevada de Santa Marta . In La Cocha there is a small island called La Corota which is visited by all kinds of travelers to see the spectacular fauna and flora of this wetland.

Is it located in the Orinoco-Amazonas transition zone,  near the indigenous sacred site of Cerro de Mavicure . Because of its characteristics, this is a unique zone in the country, since the floodplain forests belong to the Amazon Biome and the hydrological ecosystems of white, black and transparent waters are characteristic of the Orinoco River. According to this, it is not difficult to imagine that here there is a great diversity of species, among which are some endangered species such as the dark green macaw, the otter and the anteater.

In the extreme south is the seventh of the wetlands in Colombia . It is located on the Amazon River and is composed of several lakes and lagoons interconnected by rivers and streams. These lakes sustain species of plants and animals such as ceibas, black caimans and 136 species of birds, including the largest freshwater fish known, among others. This ecosystem also provides important functions such as flood and erosion control, river transport, recreation and tourism.

The richness of Colombia makes it a great country worth discovering, here one can go from Heritage Villages and Monuments , to wonderful deserts , perfect places to camp and see the stars , sunbathe on the best beaches in Colombia and South America . Discover the cultural wealth in the best museums and end the night dancing in the nightlife places of the country .